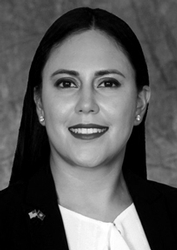 Stephanie attended the University of Central Florida where she received her Bachelor of Science degree. Thereafter, she received her Juris Doctorate from Florida Agricultural and Mechanical University College of Law. While in law school, Stephanie was a certified legal intern and was able to represent clients in both Criminal proceedings and over 30 mediation proceedings.

Before joining AWTSPA, Stephanie worked for the State Attorney’s office in the 9th Judicial Circuit as an Assistant State Attorney (ASA). She served as an ASA in County, Juvenile and Felony divisions. During her time working as a prosecutor, she gained valuable knowledge and insight which she now uses to aggressively defend her clients in the civil litigation arena.

Stephanie is currently a Captain in the U.S. Army Florida National Guard where she has served since 2009 and is assigned as a Judge Advocate. As a soldier, she reports for duty whenever the state or nation calls her to serve.

Stephanie is originally from Brooklyn, New York and has resided in Florida since she was a child, Florida is where her heart is. When she is not working, she enjoys cooking and spending time with her daughter Amelia and her husband Juan.