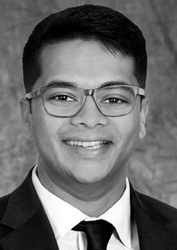 Raisul A. Bhuiyan is an associate with Alvarez, Winthrop, Thompson & Smoak, P.A. His practice is focused on litigation.

Mr. Bhuiyan received his Bachelor of Arts degree from St. Lawrence University in 2016. Thereafter he received his Juris Doctorate from Barry University in 2019. While in law school, Mr. Bhuiyan was a member of the Collaborative Family Law Clinic Journal as a Note & Comment Editor, where he edited several notes from fellow Attorneys in the Orlando legal community, as well as a Phi Alpha Delta fraternity.

Mr. Bhuiyan is originally from Brooklyn, New York and has resided in Florida since 2016. When he is not working, he enjoys spending time with friends and family.