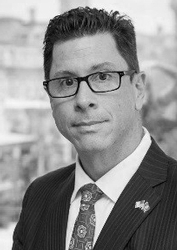 Following his service in the Marine Corps, Bill received a B.A. from University of South Florida. While completing his undergraduate education, he worked as a complex litigation paralegal. He attended Cumberland School of Law at Samford University, where he was a Senior Editor of the American Journal of Trial Advocacy. He also was a member of Cumberland’s perennially nationally ranked trial team, having won several trial competitions. Bill obtained his Masters in Business Administration from Samford University. After receiving his Juris Doctor degree, he worked as a litigation associate at an insurance defense firm in Alabama. Ultimately, Bill returned to Florida and joined a well-known insurance defense firm in 2001.

Bill is a proud 6th generation native of St. Augustine, Florida. He is a private pilot, who holds an instrument rating, and currently flies a Cirrus SR22-Turbo.