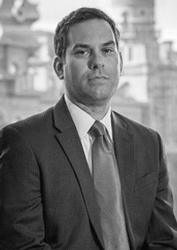 Shortly after earning an undergraduate degree in Marketing from the University of Arizona, Mr. Glassman moved to the New York City Metropolitan area. In 2001, he commenced his legal studies at the St. John’s University School of Law. While in law school, Mr. Glassman was a member of the St. John’s National Mock Trial Team, an Articles Editor for the St. John’s Journal of Legal Commentary, and received Dean’s List honors.

Mr. Glassman began his legal career in New York City practicing in the federal and state courts of New York, New Jersey, and Connecticut. In 2014, he became a member of the Florida Bar, and in 2015, moved to Tampa with his family. Mr. Glassman joined Smoak Chistolini & Barnett as an associate attorney in November, 2015.

Mr. Glassman was born in Philadelphia, Pennsylvania and raised in Scottsdale, Arizona.